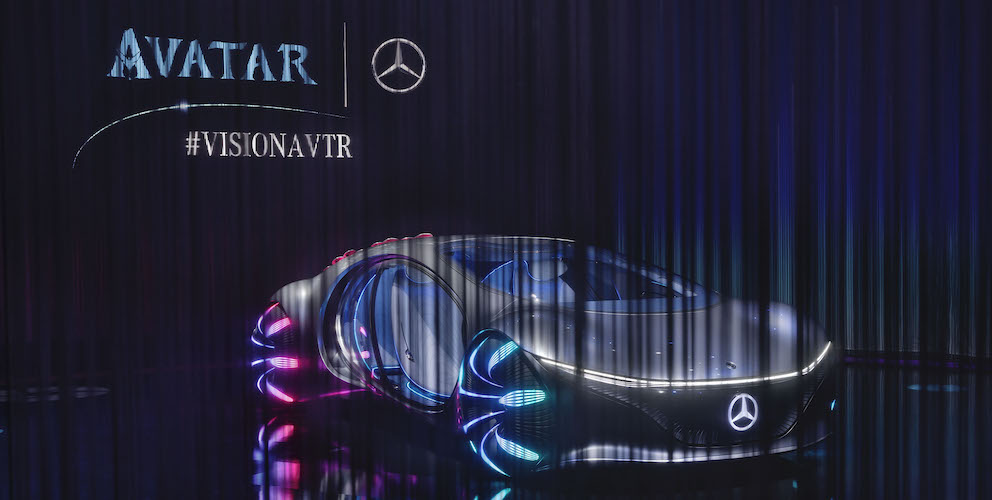 jangled nerves was asked to design the trade fair presence for Mercedes-Benz at CES in Las Vegas for the sixth time in a row. At a trade fair renowned for showcasing innovative, breakthrough technologies, the presentation of pioneering concept vehicle VISION AVTR effectively bridged the gap between consumer electronics and automotive topics. Media and attendee interest in the car developed by Mercedes-Benz chief design officer Gorden Wagener, his team and a Disney crew was extremely high. While CES was still running, the stand received a host of best-in-show awards, including awards from US tech portals Engadget, ShlashGear and GeekSpin.

The VISION AVTR embodies the vision of Mercedes-Benz designers, engineers and trend researchers for the mobility of the future. Moreover, the high-tech vehicle, inspired by Hollywood director James Cameron’s fictional universe in Avatar, showcases a completely revolutionary form of interaction between human, machine and nature. This ground-breaking human-machine merge was the focus of the stand presentation at CES.

Mercedes-Benz not only looked far into the automotive future in Las Vegas – for the first time, a rare opportunity was offered to experience the VISION AVTR up close and even interact with it. As an additional bonus, the designers from Mercedes-Benz and Disney (Lightstorm Entertainment) were on hand to serve as explainers.

The »Inspire« exhibition area marked the start of an exciting customer journey, which proved so popular that many trade fair attendees queued for hours to experience it. There, visitors could find extensive background information about the vehicle displayed on seven large columns, elucidating such features as its striking woodsprite wheels, revolutionary battery technology and vegan DINAMICA® seat leather. Design sketches were also on display, offering insights into the creation process behind the concept study. To further heighten the anticipation of experiencing this visionary electric car in person, the VISION AVTR was not yet completely visible in the »Inspire« area.

The »Excite« area provided a climax to the presentation: Visitors were enveloped in a multi-sensory experience of light, smoke, music and vehicle. Excitement was already generated on the approach to the VISION AVTR: Just like an animal that cocks its ears, the concept vehicle »greeted« visitors by means of 33 wing flaps across its rear section, which moved and were illuminated organically.

The »Immerse« area gave a final curtain call on the customer journey. There, trade fair attendees were given the unique opportunity to actually sit in a seat box of the VISION AVTR – a very special and completely immersive experience, as media content was also projected onto a screen in front of the vehicle. The main screen of the AVTR thus combined reality with a cinematic world to create a unprecedented trade fair experience.