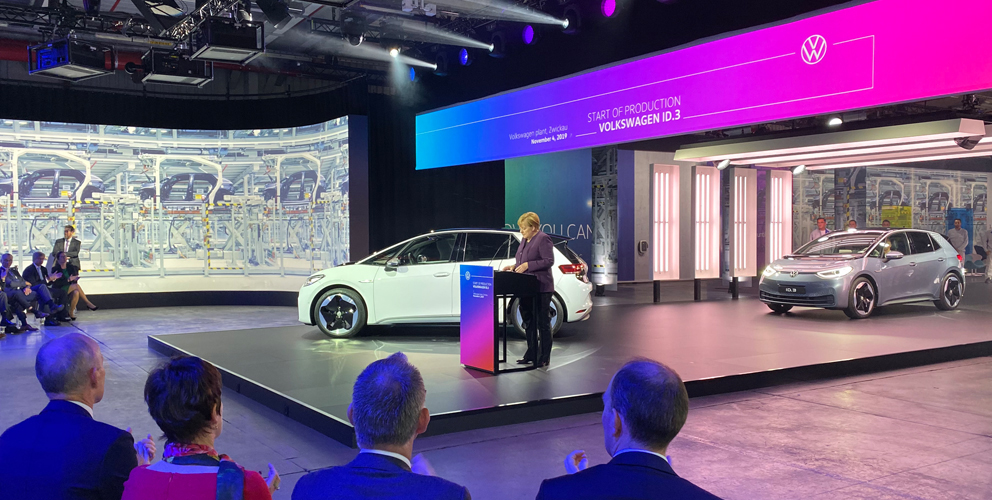 jangled nerves orchestrated the highly anticipated start of production of the Volkswagen ID.3*. The first vehicle rolled off the production line at the Zwickau plant on 4th November in the presence of German Chancellor Dr Angela Merkel, Minister President of the Free State of Saxony Michael Kretschmer, and VW CEO Dr Herbert Diess. This marked the official start of series production by Volkswagen of the ID.3 electric car. The one-hour launch event, attended by several hundred guests from politics, industry, media and VW employees, focussed on the system change to e-mobility.

The proceedings took place at the Zwickau plant to underscore the authenticity of the event – because a successful process of transformation always has a lot to do with identification. The conceptual idea behind the event was for guests to experience at first-hand how the Volkswagen workforce has boldly tackled these far-reaching changes. There is a long tradition of change at this particular production site: It started out producing vehicles from Horch, followed by the famous Trabbi, while the VW Golf is still being produced there today.

The event was orchestrated in such a way as to create fascinating images for audience members and media alike. To this purpose, jangled nerves produced a series of immersive films to mark the start of production of the ID.3. These were shown on a huge, 270-degree screen, which wrapped around the stage and spectator area. Consequently, guests and employees were not only spectators at an automotive event, but became part of the proceedings.

The film footage showed the diverse transformation processes involving the Zwickau site today and in the past: employee statements, the latest technological changes for electric car production, as well as a historical retrospective of events stretching back to 1904. Interviews with the workforce formed the core component of the message that Volkswagen is transmitting to the automotive world.

Individual settings for all speakers

Each speaker was given their own setting to make it possible to experience the event cinematically. Thomas Ulbrich, Head of E-Mobility at Volkswagen, could thus be seen at his own plant, while Jens Rothe, Chairman of the General Works Council, spoke in a circle of employees and Minister President Michael Kretschmer stood in Zwickau’s main marketplace. Dr Herbert Diess gave his speech in front of Volkswagen’s new ID. family and an expressive key visual that impressively highlights the carbon neutral-balanced production of the ID.3.

The event was held in the logistics building at the plant. Three interconnected zones were implemented in the 150 metre-long space: a 800m² reception area that doubled as a brand space for the ID.3, a similarly sized show arena with staging, and a 1000m² after-show area that functioned as a complete TV studio. This offered the many media representatives the necessary space: Camera teams had no fewer than five ID.3 vehicles at their disposal. Moreover, the studio offered diverse options for uninterrupted interviews and in-depth information. The backstage environment was designed to resemble a vehicle assembly line. It was closed during the show and only came into play with the real highlight of the event – the official start of production. As the screen opened and the first real-life ID.3 drove through a light tunnel and out onto the stage, the media presentation and the orchestrated space on that day merged completely into one.

* The vehicle is not yet available to purchase in Europe.