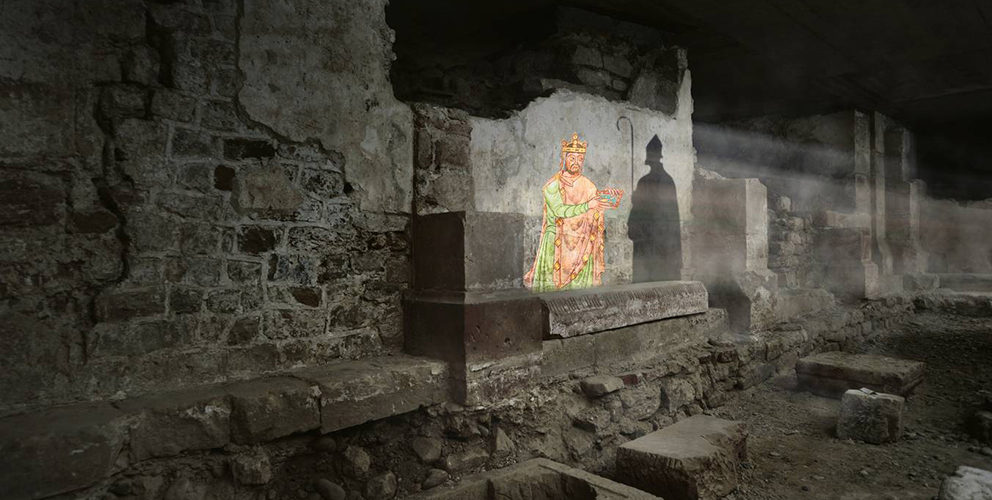 Crypts are mystical places. Even more so if they have lain hidden for decades, like the crossing crypt under Basel’s Heinrichsmünster cathedral. This crypt was first opened to the public in 2019, as part of celebrations to mark the cathedral’s millennium. After this sacred space had been excavated by Archäologische Bodenforschung Basel, jangled nerves was brought on board to show it off.

At the heart of our multimedia presentation is a 270-degree installation that provides visitors with an audiovisual experience of the cathedral’s long history, stretching from the first Carolingian structure (820 AD) to the newer, late-Gothic building (1500 AD). As such, the permanent exhibition offers a unique insight into the history of this cathedral city and is now the main attraction on a tour of the city that explores sites bearing traces of Basel’s Celtic, Roman and medieval past.

This mysterious site under the crossing lay buried, cloaked in darkness and cut off for almost a century. It was only in 1966 that archaeologists first started to make their way through the debris and masonry, layer by layer. They were aware of the significance of their find, but it took time to reveal the full extent of a crypt whose origins stretched far back into the mists of time. In so doing, they also unveiled the only place in the cathedral where the remains of all the previous structures can be seen.

While the crossing crypt may have been revealed by the excavation work at Basel’s cathedral, it remained inaccessible to the public for a long period of time. In fact, the space lay untouched for 50 years, with only a concrete visitor platform created for visiting experts. Ultimately, it took until the anniversary year of 2019 for the fully restored space to be brought back to life.

The crypt’s walls have witnessed more than a thousand years of history, which is explained in a series of plaques on the building’s foundation walls. There is also a large exhibition cabinet filled with numerous artefacts, while a multimedia display is projected onto the walls of the crypt itself, offering an in-depth look at the history of both the cathedral and the city of Basel.

The visually gentle multimedia production is reminiscent of a shadow play, with only the silhouettes of the actors and props visible. Authenticity was a key consideration when producing the film sequences. For example, the costumes and props had to look absolutely perfect when viewed from the side. If not, adjustments were made until the experts at the Archäologische Bodenforschung were satisfied that everything was historically correct. The same attention to detail was paid while setting up the dynamic displays, to ensure, for instance, that the way in which a medieval stonemason taps away with his antique tool is identical to that of his historical predecessors.

As well as exploring the history of the cathedral and the crypt’s construction, the production also looks at the changes that the city of Basel has undergone over time. Archaeological topics that are also aiming towards younger target groups truly come to life in this setting, as evidenced by the positive response from the many groups that have visited so far. The lighting and sound effects created by jangled nerves and Idee & Klang undoubtedly play a part in this, giving visitors a uniquely vivid insight into the cathedral fire of 1185, in particular. Incidentally, it took some time to put together a perfect blend of sounds that wasn’t too loud: after all, a crypt is a mystical place, not a cinema.