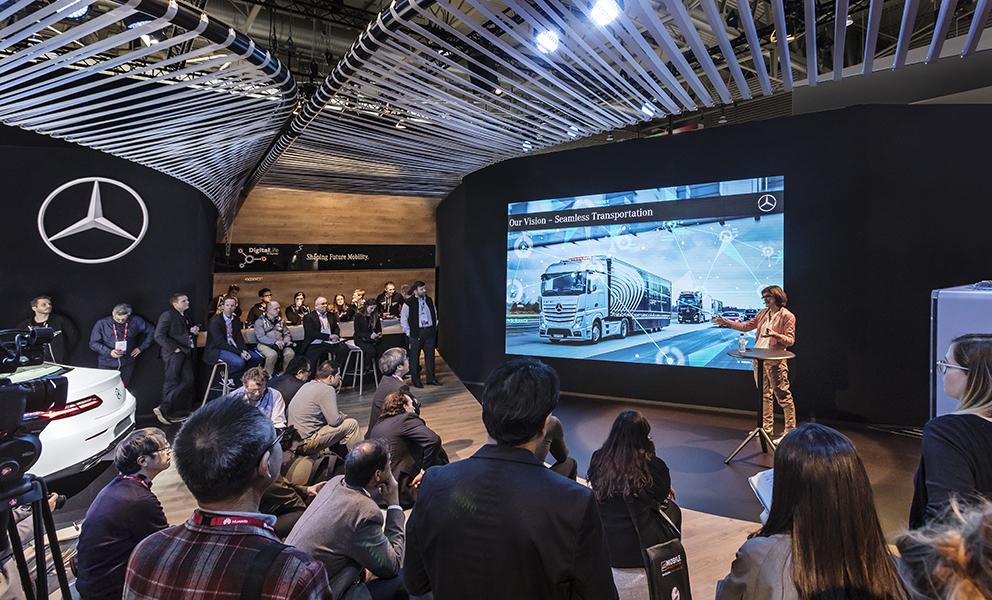 Mobile plus Mobility. When Mercedes-Benz makes an appearance and embarks on a journey to an event, it keeps things coherent and consistent with jangled nerves. Taking what would otherwise be a classic automotive tradeshow to a different level, they reach out to new target groups and foster new relationships. As the host of a congress they showcase the new brand experience of Mercedes-Benz: approachable, personal, intriguing and inspirational. In 2017, Mercedes-Benz made its first appearance at the MWC in Barcelona. The design and communication mirrored its successful appearance at the Las Vegas consumer and technology tradeshow CES 2017, acting as a satellite by conveying the same strategy and concept of Mercedes-Benz. This laid another important brand milestone for the event, based on the same design created for Mercedes-Benz for all digital technology shows. So again, everything revolved around people and ideas – the content, the architecture, even the use of space and layouts. 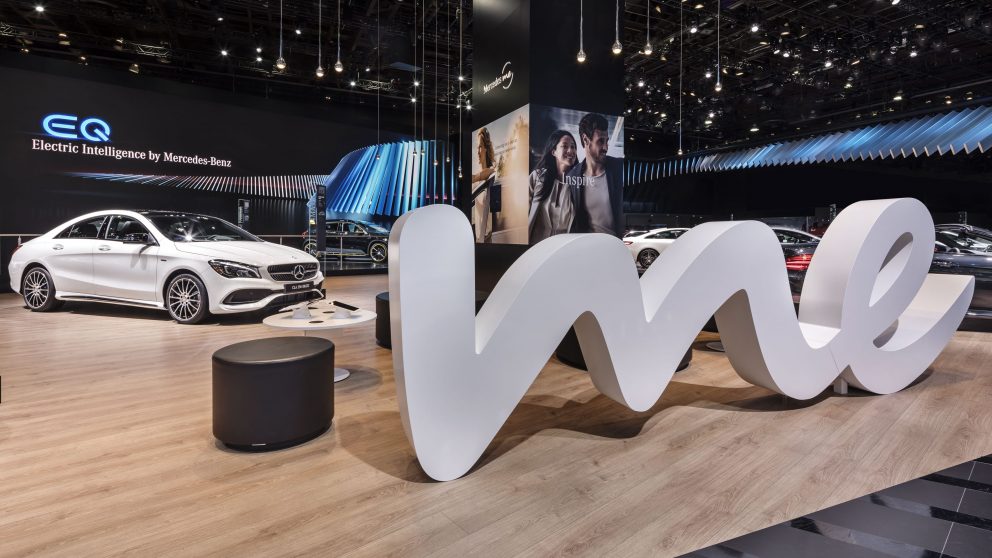 In 1957, Mercedes-Benz became the first European car manufacturer to exhibit at the most important U.S. auto show: the NAIAS in Detroit. In 2017, Mercedes-Benz underscored the longstanding international commitment of its brand and its special affinity with the American market. At the Detroit Auto Show in 2017, Mercedes-Benz celebrated the best sales in the company’s history and its top position in the premium market segment. One significant variable in this winning formula: AMG, a brand that’s extremely popular in the U.S. So what better place to kick off the AMG anniversary than at the Detroit Auto Show 2017!

50 Years of Driving Performance: To celebrate its anniversary, AMG presented the impressive Mercedes-AMG GT C Edition 50, which jangled nerves cast as the protagonist in a spectacular anniversary film. The idea: Tell the story of 50 fascinating years of AMG based on emotions, not the date on the calendar. How? With futuristic scenes filled with all the intensity and character of AMG.

When jangled nerves goes to an A-list trade show with Mercedes-Benz, it always puts the brand center-stage and emphasizes brand design. For example, the large LED screen is much more than a flat display area. It’s a digital extension of the physical trade show happening all around, tapping into the corporate design, building on everything with the right media. The new Mercedes-Benz E-Class Coupe was showcased in a unique choreography between the vehicle itself and the Silver Flow display.

To really bring the media into the foreground across the entire area occupied by the company at the trade show, lighting was used to create the right mood. To present the electric models in the Mercedes-Benz family, fiber optics in the flooring interplay with the backdrop on the LED screen. And what was the highlight? The fully electric Mercedes-Benz concept vehicle “Concept EQ,” which projects the impressive Mercedes-Benz success story into a new age of connected travel.