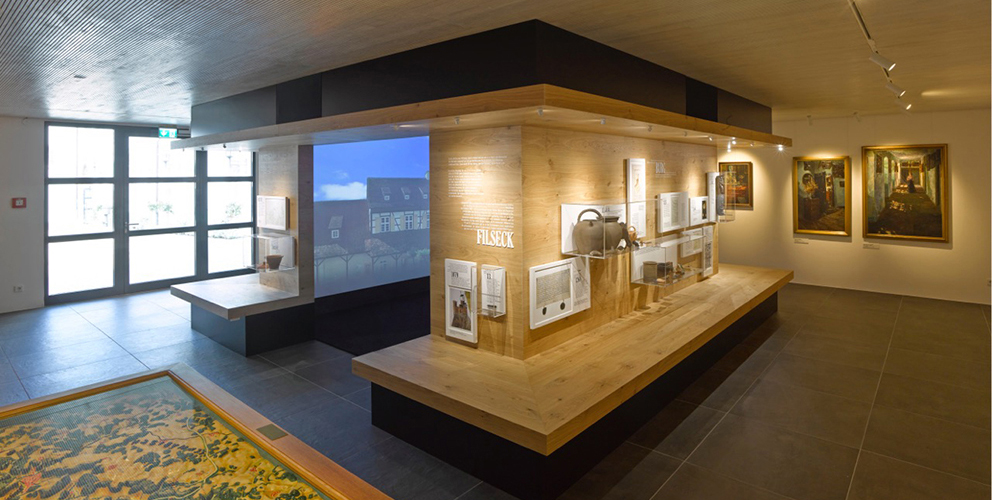 Medieval crockery, letters written by lords locked away in dungeons, varieties of spelt cultivated specially for the aristocracy – these are just some of the artefacts that chronicle the patchwork past of Filseck Castle. The fort dates back to the 16th century and the court of the Hohenstaufen dynasty of kings, who converted the edifice into a magnificent renaissance palace. It went on to became one of the most advanced economic assets in southern Germany. But then, in the early 1970s, many of the outbuildings were destroyed by fire. The building had to be completely redesigned and renovated, but this was also an opportunity to build a new visitor centre and open a permanent exhibition.

When visitors enter the recently redesigned activity area today, they are immersed in the rich history of the buildings and their occupants. The exhibition area is based on the architecture of the castle itself: the ground plan of the four closed wings of the building is replicated in the exhibition as a large U, a symbolic reflection of the historical complex. The room measures 133m2 and it is separated in two by an exhibition and a panoramic cinema using analogue and digital technology. The exhibits down the sides of the U recount the history of Filseck Castle and the surrounding area, going back as far as the first known cases of Neanderthal man in the Fils Valley 75,000 years ago, to the first Roman settlements and the building of the castle in the Middle Ages. There is also a display of historical artefacts from the building’s owners and occupants, some very recent. On the inside of the U there is a panoramic cinema showing breath-taking sequences of the castle grounds and shots of the surrounding countryside.