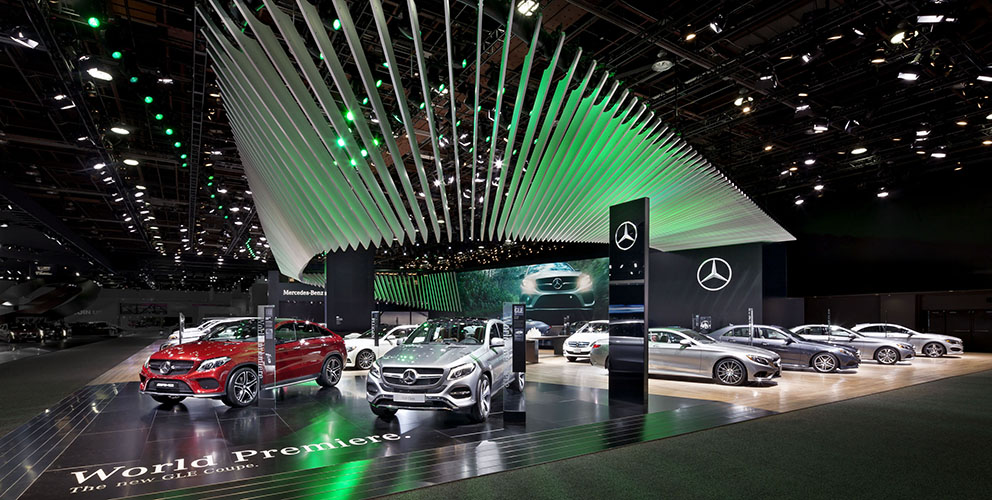 This was the second outing for the sweeping Silver Flow spatial sculpture, having made its debut as a stand concept at the Paris Motor Show in 2014. Now it was time to take the adaptable design to a new level, bolstering the brand architecture across the entire area of the stand, appealing to visitors from afar. On the stand itself, the display area was transformed into an experiential brand zone. The rear of the stand featured a single-sweep homogenous background, providing a backdrop not only for the Silver Flow itself but also for vehicle presentations, subtly integrating the themed area of AMG. Four world premieres were placed firmly centre-stage at the show, including the F 015 Luxury in Motion research car, which had just been driven all the way from Las Vegas to Detroit. The highlighted vehicles were positioned proudly on a large screen and featured prominently in media sequences played on the huge 18 x 6 metre LED screen.

At the heart of the stand, the Plug-in Hybrid was displayed with the B-Class Electric Drive. These were accompanied by special, themed furniture to provide visitors with additional interactive product information.

Mercedes-Maybach and Mercedes-AMG were positioned centrally, next to the stage. To play to the exclusive image of Mercedes-Maybach, the area was adorned with icons of luxury placed discreetly in a glass cabinet by the displayed car. The ambience of the AMG zone was accentuated by a black screen with integrated AMG logo and strongly defined white lines. Integrated graphics were used to add depth to the display and provide the vehicle with an eye-catching platform. 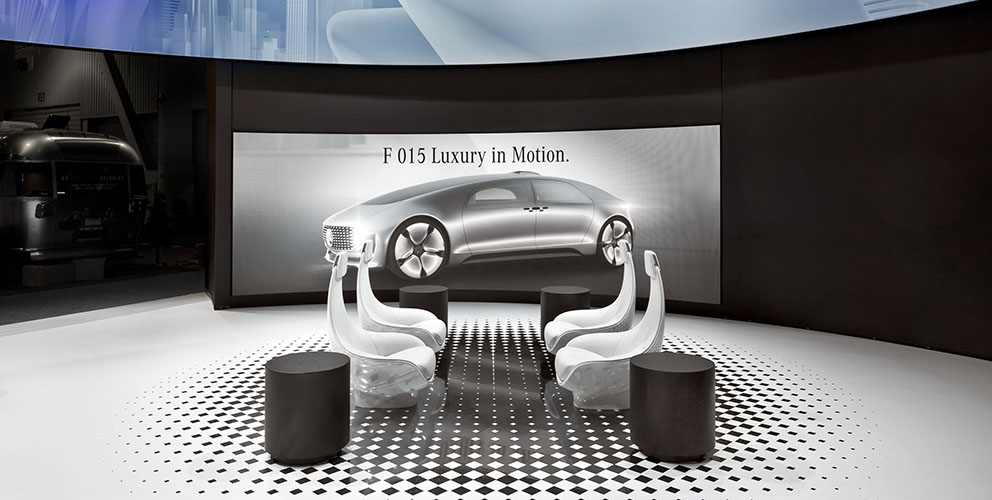 When Mercedes-Benz lifted the curtain on the world premiere of its F 015 Luxury in Motion at the CES Las Vegas in 2015, it also unveiled an inspiring vision of the future, a taste of things to come beyond the features of autonomous driving. This was a vision of future travel underscored by a meaningful message: the future will not hinge on technology, but on human beings and imagination. This principle formed the backbone of the entire exhibition concept for Mercedes-Benz at the CES.

High-tech, fast-moving communication; inspirational, authentic actions that were both intelligent and emotional – the trade stand placed people on the pedestal, a reflection of the underlying philosophy of the F 015 Luxury in Motion, which had already caught the eye of observers around the world. Three parallel stages were set up, like an extension to the central plaza – three choices facing the individual. The messages conveyed and the interactive trade stand units acted as a vehicle of live dialogue between the engineers and designers of Mercedes-Benz and the intrigued visitors to the trade show. To reflect this theme, the stand was futuristic in appearance yet defined by a clear visual identity, marrying the inviting area marked by premium quality with spaces that beckoned the visitor to invest time and thought.